Avant Tecno Oy, a company manufacturing loaders located in Ylöjärvi, has grown steadily during these past few years. In 2017, Avant started an investment program of about 10 MEUR that includes the development of production facilities, production and material logistics as well as automation and digitalization. Leanware Oy was chosen by Avant as partner for production digitalization. 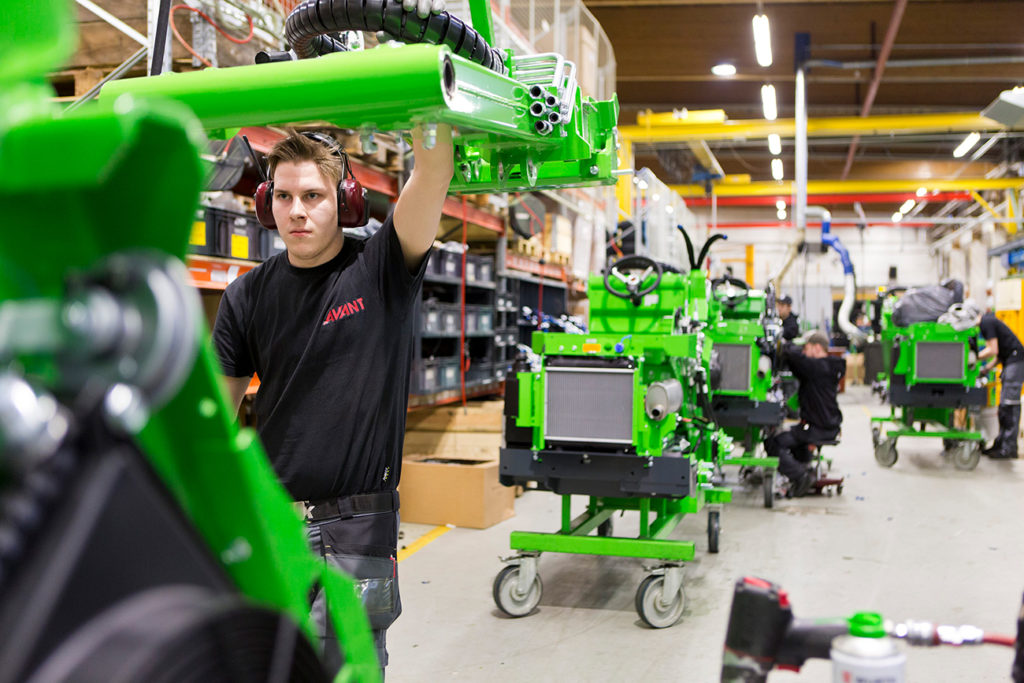 How have the first 12 months on the road towards digitalization been? What has already been achieved, and what perhaps still lies ahead?

In 2017, Avant set the doubling of their production capacity as their goal. When measured in production quantities, this meant that 80 pcs per week had to become 160 pcs per week by 2021. In the past few years, Avant has invested in the machine stock in primary production, but now it was determined that only the increase in machine and tool stock capacity was not enough to reach the set goals. A clear need for production transparency (MES) and a modern pull system (WMS) was recognized. One of the decisions that was made that would affect the operation significantly, was the decision to move from a 5-phase permutation flow shop to an 18-phase flow shop.

Avant’s production has, for a long time, mainly operated using a kanban pull system, which was seen in production; no job tickets, no set picking, ERP does not control production or logistics. In practice, this has meant giving up pipeline stocking and making continuous kanban-based small deliveries to assembly at the right time in appropriate transport units. This has enabled the assembly operator to fully concentrate on refining assembly work, which already had raised the productivity of the assembly cells. The traditional kanban process has however required a lot of manual work (e.g. handling kanban cards). On the other hand, also the new 18-phase flow shop would set challenges for material logistics and its control.

Once the business objectives were clear (raising production capacity) and the most important production development goals had been identified (production system, material logistics), a more precise requirement specification process was started together with Leanware. During the requirement specification process, the goal production process as well as the WMS controlled kanban process for materials was double-checked and described. The result was a clear view and description of changes that had to be made to the current process, the phases of the digitalization process as well as the level of system management for each instance of use.

The first phase of digitalization was the implementation of the LeanwareWMS on the current production line in spring 2019. The MES enabled real-time deviation reporting for part and quality deficiencies. Previously, the deficiencies had been logged and reported manually, which caused a lot of clarification work, unreported deviations and delays in fixing errors. The MES also gathers work cycle time information from the current line that will be used to support the work cycle plan of the new flow shop. Additionally, using the MES, Avant has real-time information about the stage of manufacture of the loaders, their physical location on the line as well as a comprehensive visual representation of the assembly line’s situation.

During the next phase towards the end of 2019, Avant implemented a central warehouse, where all purchased parts will be centralized. A LeanwareWMS management pilot is currently under way in the warehouse. The goal is to change all of the assembly cell materials to be kanban-controlled, meaning that the WMS makes the order suggestion to the warehouse based on the material balance information of the assembly cell. From the central warehouse, the material is taken to assembly using a material train, which is also controlled by the WMS (what, where, when). The growing production capacity and the bigger flow shop will grow the resource requirement of logistics, but with the help of the WMS, the required additional resources can be minimized.

Avant has shown extraordinary ability to make the needed changes to their operations. From the view point of a supplier and partner, the critical prerequisites for success have been clear, action-oriented goals, the courage to try something new and the understanding to implement new methods of operation piece by piece. We can’t wait for the new production line to be finished and for the results it will create! Go Avant Tecno!