Do you like three-letter acronyms such as ERP, PLM, PDM, APS, MES, WMS or OPC? Yes, I don’t really like them either. However, I do intend to use them in this article of mine, because you cannot write about systems of digitalization of production without mentioning them. If you have already dealt with issues and questions related to digitalization of production before, you will probably be familiar with at least some of the abbreviations listed above. This article is not intended to fully explain what each of these acronyms means and what you can do with a system hidden behind the acronym. Instead, the goal here is to briefly grasp the overall picture of systems needed to digitalize production and how they are interconnected.

Let us start by introducing one more acronym: ISA-95. This is a standard describing relationships and responsibilities between company-level systems, operational systems needed on the factory floor and automation. This standard divides the operations of an industrial manufacturing company into five levels. Levels 0 to 2 include the physical process of production and the equipment/automation level. Level 3 includes the operational activities of production yielding desired end products. Level 4 includes enterprise-level business operations. From the aspect of digitalization of production, level 3 and its relationships with functions of other levels are of particular interest. For level 3, the standard describes four areas of functions. These areas are Production, Maintenance, Inventory and Quality. Each of these areas includes a variety of functions ranging from schedule planning and process control to data collection.

The ISA-95 standard does not really deal much with which digital system is responsible for which function or scope of activity. In fact, this standard does not even deal with whether the functions are carried out using a digital system or a manual mode of operation. In this sense, it is a neutral standard. However, to move forward, we do need concrete actions. One view is that all functions should be performed by a single system, such as the ERP system. This is certainly a possible approach, but it is worth noting that the 3rd level functions in ISA-95 include the following specific characteristics:

As mentioned above, the starting point of any ERP system is the business aspect. Therefore, from the point of view of efficiency, reliability and dependability, for example, it is recommended that, in addition to the ERP system, for 3rd level functions specific operational systems developed for them are used to perform this level’s functions. Still, operational systems should be connected to the ERP level system. Third level operational systems are often referred to as MOM (Manufacturing Operations Management).

The figure below shows a typical model for production digitalization where, in addition to central 4th level systems (ERP and PLM/PDM), three operational systems (APS, MES and WMS) have been taken into use to improve production planning and control as well as material flow management. Arrows in the picture describe the exchange of information/data between systems. It is worth noting that connection to automation and equipment takes place specifically through operational systems (primarily MES and WMS). 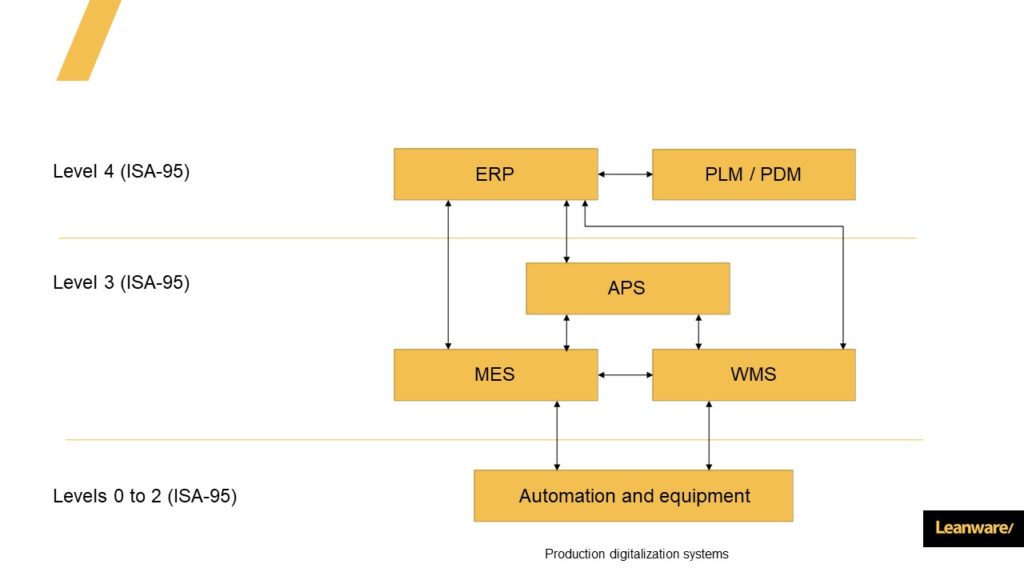 In addition to what is presented in the picture, any additional enhancements to the operational system toolbox include the maintenance system (CMMS) and the quality management system (QMS). Also, a useful tool for implementing the link between operational systems and automation is the OPC interface.

DOES IT HAVE TO BE THAT DIFFICULT?

After all this, you may still ask yourself whether all these three-letter acronyms are needed to digitalize production. What if my whole production operation is a compact 40 person unit? Do I still need the full-board package? The question is justified in that the ISA-95 standard was originally developed from the perspective of global companies. Still, it illustrates the area of activity so well that it is good to use it as a tool to understand the bigger picture also in digitalizing production of smaller industrial manufacturing companies. As mentioned above, the ERP system alone and its potential production activities will also enable us to get going. However, separate operational systems do provide clear benefits in terms of efficiency, reliability and dependability, for example. The benefits can become concrete even in smaller production operations. The model also provides a good starting point for increasing production activity. This is exactly why it is worth identifying the advantages and disadvantages of various approaches and then choosing the solution that suits your own situation.

Warehouse is a warehouse

At worst, a warehouse is just that and nothing else – and its significance as… Read more

Do you like three-letter acronyms such as ERP, PLM, PDM, APS, MES, WMS or OPC? If you have already dealt with issues and questions related to digitalization of production before, you will probably be familiar with at least some of the abbreviations listed above. Read more

A leaner factory with a pull system

20–30% of working time is productive and 70–80% is a loss or only assisting work. Which should you develop in order to achieve greater results? Read more